two days off, sunday spent dragging a puppy around Abingdon.

back tomorrow, after a full on week of recording a song a day, some not even on the blackboard....one of jonny's tunes, packing a lot in 2 mins 45 seconds! Spent weekend agreeing with Nick Cohen, hoping Simon Starling would win the Turner, listening to new modeselektor album, and waiting to get the boards of canada and pharrell williams tomorrow. Exciting talk of shows next year; it's good to have a plot. Another week ahead in the studio, then more in December. I'll keep you posted this week with more news and wonky shots, so wish us luck!
Colin 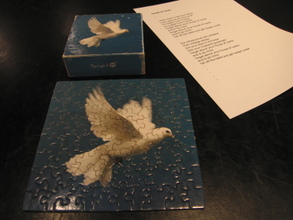 in a house that may be or maybe not haunted

back into work again after very quick break contending with the usual winter illnesses and fevers.
-which are still messing with things.
jonnys stepping over guitar leads and pedals and laptop as we
demo
yet another new tune added to the blackboard called Rubbernecks.
at the moment its a demo. when is a demo not a demo? when its in time. whats in time?


im asking jonny to lay off the sweet rock and stick to the sticklebrick licks. more-

i met with George Monbiot.
another person who thinks a bit like me (only faster),
its a relief sometimes, i dont feel quite as crackers as i did.

oh yeah and this house is haunted. feel like your beingwatched..
yes its another normal day in the world of radioheadski
Thom

so now we have..
lots of loose ends.
or starts.
two weeks sketching things.
chipping away at structures.
making polyphonic sweeps.
mountains of words.
the blackboard is filling up. 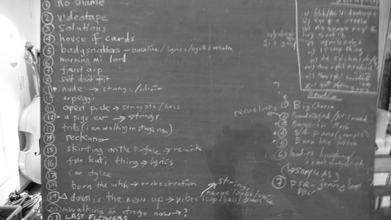 not got th e words to PAY DAY yet.

but today i got the words to BURN THE (WHITE?) WITCH.. thats a good un. jonny has losts of orchestration tasks now including this..('oh good' says he exiting stage left)

blackboard filling up with ideas. lots of things happening all over the studio at once.. which i always like.. although i keep having to remind myself to sit down occasionally.

stanley is hammering and making greetings cards which may or may not be for christmas.

im working on something that i think is called PAY DAY. im gonna lay the lyrics line by line on the floor and shuffle them. and im having to play gentle fingerpicking over furious beat.

ed is sick as a dog at the moment poor guy. he is feeling very sorry for himself and keeps sending us sad little texts.

in the distance there is a cloud but as im in an ok mood i can keep it away
........friends of the earth have asked me whether i would meet Tony Blair at downing street to discuss what our government is not doing about climate change..i dont know if this will ever happen for certain.... it is rattling around in the back of my mind and concerns me a lot.
i have no intention of being used by spider spin doctors to make it look like we make progress when it is just words.
id love to know what you think but i cant ask.
youd say oh ther e he goes again interfering and meddling in politics why doesnt he get on with the music and shut up.
perhaps because i feel like a hypocrit if dont do anything, and equally feel like a hypocrit if i try getting involved.
nobody wants to know. none of u s do, me included id love to forget about it like your average Times reader. wed all like it to go away. turn to to the rising sea and say come back later im busy right now.
Blair has been uttering nonsense lately about kyoto and such, real la la stuff... looks like th eamerican right have finally eaten his mind... blah blah why on earth would i meet this man? o r perhaps that is exactly why i should. but i dont have powers of persuasion, i just have temper and an acid tongue.

trust me i find this as dull as you do... politics is poison..
what do yout think i should do?

speak to you later
Thom