What have you done to my face?

If you are a tumblr type person then we'd liek to be your friend.

Following on from the launches in London, New York & Berlin, Thom and Nigel will be visiting Barcelona and Paris for two more Atoms for Peace events. They are:

Tickets for the full ATOMS FOR PEACE experience (Thom, Nigel, Joey, Mauro & Flea) go on sale in the US tomorrow.

Here is a list of ALL the shows announced so far, please go to http://tickets.waste.uk.com for more details.

Presale tickets for all shows go on sale Wednesday 6th March at 9am (UK) from and then on general sale from Friday 8th March at 9am . Go to http://tickets.waste.uk.com for more details.

Hello and I'd like to let everyone know I'm off on an adventure to South Africa on Saturday.  I've been working with a charity based there, called the Children's Radio Foundation, which works with young people in half a dozen countries in Africa to give them journalistic and broadcasting skills, and a voice to tell their stories.  I'm going for 11 days to visit some of the places where the CRF is working with youth groups, hospitals and radio stations in South Africa. You can follow my trip HERE.  I will be putting up some pictures, and blogging about the journey as I go along.  You can see and hear some of the stories by following the Vimeo link, and Soundcloud too.

I'm very excited to be going, and I hope you will enjoy following my journey on the site.  I'm working with CRF because I've always believed in the importance of curiosity, and I grew in a home that was passionate about ' Radio ', as a window to the world outside. In my day job as a musician, I've always loved travelling, meeting people, and making connections with them about all our lives.   CRF does all of this this brilliantly, through its radio and journalism training.  CRF informs and enlightens everyone's lives - the reporter, interviewee, and the listener, wherever they may be.   I'll also be checking out some music too, so keep an eye on the site! "

Next Atoms for Peace Single

So in the midst of yet more weird weather and the beginning of another year it feels right to put out a song called ..... Judge Jury and Executioner from Amok. It's up on youtube here> - I hope you like it.

The flip side of the release is a tune called S.A.D. 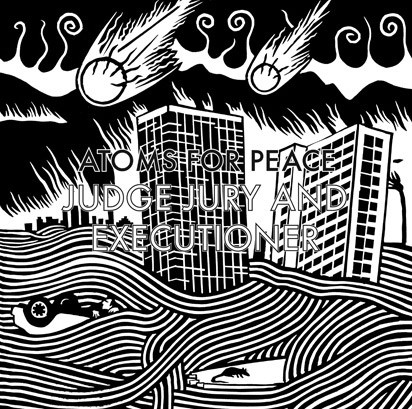